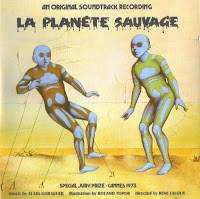 René Laloux’s trippy psychedelic sci-fi animated feature from 1973, based on Stefan Wul’s novel Oms en série, was a co-production between France and Czechoslovakia.

Fantastic Planet tells the story of the fight for freedom by humans (Oms) kept as domesticated pets by an alien race of blue humanoid giants called Traags. The film is seen as an allegory of the Soviet invasion of Czechoslovakia in the late '60s.

I first came across this little gem of a film when it was part of a double bill with Crystal Voyager - a surfing movie that used Pink Floyd's Echoes to frame the action. But I digress..... Currently out of print, Alain Goraguer's memerising psychedelic jazz score for Fantastic Planet is the perfect accompaniment to a science fiction cult classic.
Posted by Crispy32 at 19:33

Funny who you stumble across on the net!

Wonderful blog mate ... had no idea you were doing this.

Fantastic Planet + Crystal Voyager! We had that double bill trolling down here in Oz too! In fact, I ended up seeing it twice as a teen and as part of a triple bill at a drive-in theatre with "Morning of the Earth" : an Oz surfing film of some repute. I LOVE surfie films.

Mind you, the car I was in was full of smoke and chuckles, so I must revisit these soon in my sober dotage. I know, very Cheech and Chong of me ;)

best wishes ... and I'll make sure I bookmark the blog and visit regularly.