Bond and Beyond - John Barry 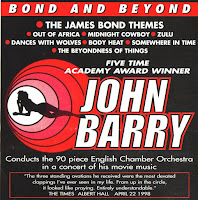 In April 1999, the Royal Albert Hall played host to the great John Barry conducting the English Chamber Orchestra in a performance of Barry's phenomenal movie portfolio.

Cutting a slight, stick like figure Barry took to the stage opening the first half of the concert with a majestic Goldfinger, followed by the regal We Have All the Time In The World.

Coming over as a slightly curmugeonly but likeable schoolmaster Barry introduced each movement throughout the night with the occasional anecdote. He certainly had little time for the likes of Duran Duran and A-Ha! Ultimately though he was there to perform and kept the small talk to a minimum. Themes from Zulu, Somewhere in Time, Moviola and Midnight Cowboy followed - the latter accompanied by the harmonica playing of Tommy Morgan who played on the original soundtrack as well as Dances with Wolves which closed the first half of the set. Not before the roof was raised with the stirring Space March. For a cue that was basically underscore for You Only Live Twice, Space March was deservedly a concert highlight along with the sultry Body Heat.

The second half opened with Born Free followed by All Time High and Out of Africa. Chris Botti took the stage to add his distinctive tones to the haunting Remembering Chet and Playing By Heart. A suite from the Beyondness of Things, a sparkling Girl withThe Sun In Her Hair and a medley of Bond themes closed a magical evening of sensational music by one of our greatest living composers. This man deserves a knighthood!
Posted by Crispy32 at 16:38

Hey, Crispy, great blog. Lotsa "things" to pick here... Thank you for all your efforts, brother (or sister, I don't really know...). If you permit me a suggestion: could you consider to post some music using an alternative host, such as Sharebee, Massmirror and the likes? It's just that there's so much great music to download and too limited time at the rapidshare host. Greetings from Brasil.

I take your point about Rapidshare but from a reliability point of view and ease of data management - I prefer to keep all my eggs in one basket.

For free users Rapidshare might seem a pain by limiting daily downloads, however premium accounts are very inexpensive and allow you unlimited access without having to wait.