Voyage to the bottom of the sea on film and TV

Released in 1961, Voyage to the Bottom of the Sea was producer/director Irwin Allen's 10th feature. Inspired by Jules Verne's 20,000 Leagues Under the Sea, Voyage to the Bottom of the Sea was a $2 million documentary style science fiction epic that told a topical tale of global warming and how the Seaview submarine saved the world from a fearsome and fiery finale. It starred veteran actor Walter Pidgeon as Admiral Harriman Nelson, with Robert Sterling as Captain Lee Crane. The supporting cast included, Barbara (I Dream Of Jeannie) Eden, Peter Lorre and of course the mighty ice busting Seaview nuclear submarine.

Whilst Voyage to the Bottom of the Sea may have received mixed reviews from critics on its release, it was by no means a washout. It was a popular attraction with the cinema going public and brought in $7 million in box office revenue. Buoyed by the success of the movie, Allen was prompted to make a spin-off TV series which re-cast Richard Basehart as Nelson and former-Fly, David Hedison as Lee Crane.

Running from 1964 to 1968 and way beyond in syndication, Voyage to the Bottom of the Sea was the decade's longest-running American science fiction television series with continuing characters. Alas not all 110 episodes were of a consistent quality. Once the writers exhausted conventional undersea adventure scenarios, a more broader base of plots emerged that got sillier and sillier as budgets and standards sank.

Irwin Allen later went on to create and develop many great TV science fiction series including Lost in Space, The Time Tunnel and Land of The Giants. He also single handedly created the disaster movie with The Towering Inferno and The Poseidon Adventure.
Posted by Crispy32 at 07:30 1 comment: Links to this post 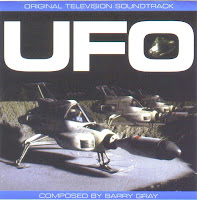 The husband and wife team of Gerry and Sylvia Anderson were responsible for some of the most innovative children's adventure series during the 1960's. Filmed in 'Supermarionation', programmes like Fireball XL5, Stingray and Thunderbirds gradually developed a level of realism that reached its apogee in 1967 with Captain Scarlet and The Mysterons. Having reached the limits of working with puppets, it was no surprise that in 1970 the Andersons launched the ambitious live action TV series UFO.

Boasting high production values with state of the art special effects, UFO was set in 1980 and starred Ed Bishop, (the voice of Captain Blue) as Commander Ed Straker. Sporting an uber-cool haircut and a buff set of wheels, Straker was head of SHADO (Supreme Headquarters Alien

Defence Organisation), a secret organisation protecting Earth against extra-terrestials brought to earth via the titular UFO's. To conceal its activies SHADO operated under the guise of the Harlington-Straker Film Studios in England.

SHADO's defence system included some jaw dropping vehicles including S.I.D. (Space Intruder Detector) - a UFO detecting satellite who reported sightings to the glamourous purple wigged SHADO Moon base controllers. They in turn would scramble the SHADO Interceptors, inexplicably only armed with one huge missile each. If the Interceptors missed t 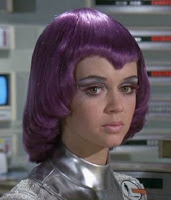 he whirring UFO's then SKY 1, a jet fighter, piloted by dancer Peter Gordeno, and launched from the submarine SKYDIVER (with a crew that included 'Lift Off' presenter Ayshea Brough), would shoot UFO's down once they entered Earth's atmosphere. Mopping up operations were covered by the utilitarian caterpillar tracked SHADO mobiles who would hunt down the dazed orange suited aliens with their green gunge-filled helmets that seemed to break at the slightest knock.

Perhaps a little adult for some young viewers more used to the gung-ho antics of Thunderbirds, UFO nevertheless covered such heady non-tea time topics as adultery, divorce, and drug use.

Primarily the music was Hammond driven, punctuated with brass and reeds, and slightly militarilistic percussion. The Ondes Martenot was also used to create an other-worldly atmosphere on the soundrack. Whilst many of the cues recall previous Gray-scored Anderson productions, the music is vibrant and punchy as personified by the title track and experimental as shown in the closing tit

Considering the high quality of the music in UFO, precious little is on general release, although an excellent double CD by Fanderson contains a fine selection of cues from various episodes. The first part of CD one consists of cues from Identified, Survival and Exposed, while the second half features music from Conflict and E.S.P. CD2's first half features A Question of Priorities, Ordeal and The Square Triangle while the second half covers Confetti Check AOK and The Long Sleep.

Although other Anderson series followed, UFO is a classic example of the Anderson's maturity coming to the fore and the versatility of the much missed Barry Gray.
Posted by Crispy32 at 10:02 2 comments: Links to this post