Batman The Animated Series - out as a 2-cd limited edition 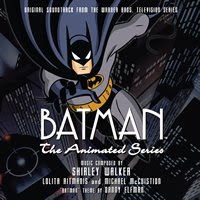 I'm absolutely over the moon that the music for Batman the Animated Series will soon be officialy available, albeit in a 2CD edition - limited to 3,000 copies.

Like last year's Blade Runner release this is a much anticipated release just in time for Christmas. Featuring the work of Shirley Walker, Lolita Ritmanis and Michael McCuiston, this is a must have CD for all fans of the Ani-Bat.

A quick glance at the track listings on http://buysoundtrax.stores.yahoo.net/baanseorsoby.html, reveals some great cues from the first season of this groundbreaking animated series. In addition to Shirley Walker's stunning interpretation of Danny Elfman's classic theme, you also get Walker's own grandiose alternate Batman theme.

I've placed my order and will be waiting in anticipation for the sound of our postie's footfall on our doorstep.

AN APOLOGY
For regular visitors to this blog, please accept my sincere apologies for a lack of new material recently. This will be remedied very soon when things calm down at work and aren't taken up with travelling and meeting print deadlines (and I stop trying to watch every episode of "24").

So with a thumbed nose to the credit crunch let's all enjoy the great music that's out there.