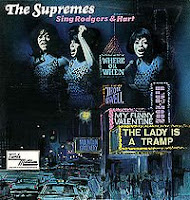 The Supremes Sing Rodgers & Hart, released in 1967 comprises covers of show tunes written by Richard Rodgers and Lorenz Hart that have been used in countless movies. This album was original member Florence Ballard's last recorded appearance as a Supreme and heralded Diana Ross' leadership of the group.

Originally conceived as a double album but released as a single 12 track LP, The Supremes Sing Rodgers & Hart was no doubt part of Motown head honcho, Berry Gordy's master plan to make the Supremes, specifically Diana Ross all round entertainers.

At the tender age of 10 (when I first heard this record), these songs were my first experience of Rodgers and Hart and in some cases the performances that I judged others versions against. The storming opener The Lady is A Tramp still takes some beating as does Mountain Greenery, Dancing on The Ceiling, the classic Motown stomping take of My Heart Stood Still and a sublime My Funny Valentine.

In 1982 the original album was re-released as The Rodgers and Hart Songbook with all the missing tracks from the original sessions. The track sequence was changed along with the artwork, which replaced the Broadway style original with a rather lacklustre tinted illustration of the group. This release soon went out of print and began to attract silly prices on E-bay. It was only in 2002 that the album could be heard again in an expanded form plus a live version of The Lady Is A Tramp, thankfully with the original artwork and track sequence reinstated. Maybe it's a lack of reverb or the fact it's not being played on a Dansette but somewhere in the remastering some of the bite of the original recordings appears to have got lost and the songs sound a wee bit flat compared to their vinyl equivalent. This is not one of those vinyl versus CD comparisons - it's just an observation.

Yes this album is occasionally over the top, schmaltzy and camp, and compared to other Supremes albums it performed poorly in terms of sales, but just put The Supremes Sing Rodgers & Hart in your CD player, gaze at that ritzy clubland cover and imagine you're at the Copa slurping Martinis while the girls belt out the classics.
Posted by Crispy32 at 10:06 4 comments: Links to this post