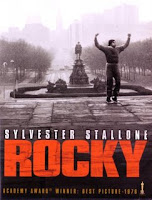 Released in 1976 , Rocky was directed by John G. Avildsen and starred Sylvester Stallone, who also wrote the screenplay. It told the rags-to-riches American Dream story of Philadephia strong arm debt collector and part time club fighter Rocky Balboa, who gets a shot at the world heavyweight championship when the scheduled contender breaks his hand.
Shot in only 28 days, Rocky made over US$117.2 million, picked up three Oscars and made Stallone a household name. It became a staple during the early 80's in the fledgeling video rental market and spawned five sequels: Rocky II, III, IV, V, and Rocky Balboa. 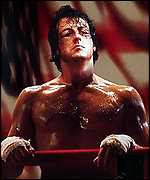 Rocky has spawned countless pastiches and imitators, from the gruelling training montages culminating in his triumphal ascent of the steps outside Philadelphia Museum of Art in Philadelphia, to the emotional scenes of bruised, battered but unbowed Rocky Balboa, refusing to go down. This latter image epitomised the America's "never give up" attitude, much more than Rambo, Stallone's other succesful franchise.

Unlike Rambo, who was adapted from David Morrell's novel First Blood, Rocky is entirely Stallone's own invention and as such has more heart. It's a tribute to the power of the movie that a statue has been erected in Philly in his honour. One wonders if future generations will eventually believe that Rocky Balboa really was a boxer.

The music for the Rocky movies can really be epitomised by two tracks: Bill Conti's triumpant Rocky theme, actually called Gonna Fly Now; and Survivor's thumping Eye of the Tiger. It's a song that always seems to inspire men of a certain age to take the dancefloor at social gatherings and adopt a fighting pose and do that menacing marauding dinosaur dance.
Aside from Dan Hartman's eminently danceable Living in America from Rocky IV, the music for most of the Rocky movies is white AOR with a preponderance of fruity synthesisers and loud gated Linn drums. But isn't that always the case with movies of that era? Ultimately the Rocky movies are great feel good movies that still make you believe that you can win, even when the odds are against you. Adrienne!!!!!!
Posted by Crispy32 at 19:32 No comments: Links to this post 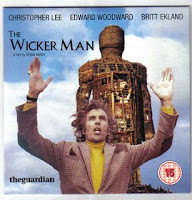 Directed by Robin Hardy and released in 1973, The Wicker Man is arguably the greatest British horror film to emerge from the 1970's. Filmed in Scotland, it features some of the most iconic and scary scenes put on film. It stars Edward Woodward, Christopher Lee and Diane Cilento plus horror queen Ingrid Pitt and a decidedly saucy but badly dubbed Britt Eckland.
Edward Woodward plays a devoutly religious Scottish police officer, Sergeant Neil Howie who

visits the isolated island of Summerisle to investigate the disappearance of a local girl. Howie soon discovers that the inhabitants of Summerisle are Paganists and as such are at odds with his devoutly Christian beliefs. Eventually Howie encounters the charismatic Lord Summerisle played by Christopher Lee, where amid the sexual shenanigins, Howie discovers more disturbing facts about the island and its beliefs to his own personal cost.
The Wicker Man is no schlocky horror movie with some T&A thrown in for good measure (though there is a bit of that c/o Ms Eckland). It delves deeper into something more primeval and sinister. The film has been analysed to death and I am sure I can add no new insights. Therefore I heartily recommend that you check out the excellent Wicker Man site http://www.wicker-man.com/ to get the lowdown on this great movie.

The soundtrack for The Wicker Man was composed, arranged and recorded by Paul Giovanni and Magnet. It comprises folk songs performed by members of the cast including Christopher Lee and Lesley Mackie who sings the opening song. The overall vibe is slightly disturbing with songs arranged to reflect pre-Christian pagan European culture and the island environment. Amongst the bawdy folk songs nestle many beautiful cues such as the previously mentioned opening song and the sensual Willow's song 'performed' in the movie by Brit Eckland in a scene that over the years has set many an adolescent boy's pulse pounding!
Posted by Crispy32 at 09:43 1 comment: Links to this post

Goodbye Lenin is Wolfgang Becker's 2003 charming tragi-comedy set in the former East Germany. It concerns a young man's increasingly ingenious attempts to conceal the renunification of East and West Germany from his ailing mother.
The film begins in East Berlin during the Cold War, where Christine Kerner (Katrin Saß), a mother with two children finds herself alone after her husband defects to the West. As a result she becomes

a loyal card carrying member of the socialist party. When she sees her son Alex played by Daniel Brühl in an anti-government protest she suffers a major heart attack which puts her in a coma. By the time she emerges from the coma, unknown to her, East and West Germany have reunited. Alex is warned by Christine's doctor that any shock could

kill his mother. So to save his beloved mother Alex is forced to devise schemes to convince her that East Germany is very much alive and well.
There are wonderful scenes where Alex and his friends scour shops looking for food stuffs that were

popular in the old days but are now no longer available. He even goes as far as to fake TV broadcasts to maintain the illusion where actual scenes of East Germans flooding in to the West is re-interpreted as West Germans seeking refuge in the East.

Yann Tiersen's charming, minimalist score for Goodbye Lenin is a 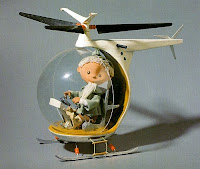 delight. With a nod towards Michael Nyman, Tiersen beautifully conveys the complex emotions in the film without resorting to crass mickey-mousing of the on screen action. The emotionally charged cues stay with you long after the house lights have gone up. Just try to listen to the Summer 78 cue without a tear forming in your eye.
Posted by Crispy32 at 08:55 No comments: Links to this post