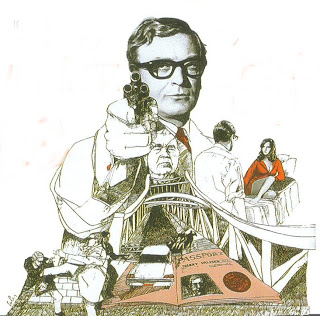 The sixties were definitely the high point for Spy movies. With the Bond Francise leading the pack, there were many others aiming to usurp 007 including The Man From UNCLE, Derek Flint and of course Harry Palmer.

The next adaptation Funeral In Berlin, whilst retaining Caine, Director Guy Hamilton led Harry Palmer down a different darkened alleyway with a more conventional story and directorial style. Composer Konrad Elfers eschewed all of Barry's stylings and cues and opted for a score that less characterised Harry Palmer but emphasised the location, Cold War era Berlin. The theme music echoed the Berlin Cabaret of Isherwood and Brecht though retained a jazzy feel.

The Billion Dollar Brain was the final movie outing for Harry Palmer, and under Ken Russell's bombastic direction Palmer became more of an observer of the increasingly bizarre goings on and effectively lost what made him so special in the first place. The soundtrack however took a even more left field approach with Richard Rodney Bennett composing a haunting score with a small ensemble and heavily featured the Ondes Martenot - a relative of the sonically similar Theramin.

Although two more direct to video follow-ups were made, featuring a soundtrack by Rick Wakeman that sounded like he'd done it for the beer -it really was time for Harry Palmer to hang up his raincoat.

Palmer's heyday was the 1960's and musically he will be best remembered by the three soundtracks, which at various times have been in and out of print. Shame really - each has its own special identity and are well worth a listen to get three individual perspectives of spy music.
For a more in depth appraisal of Harry Palmer, check out this excellent Harry Palmer Site here
Posted by Crispy32 at 15:54