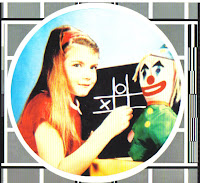 Yes it really is the music that accompanied the test cards during the late 1960's and early 70's on BBC TV - back in the days before day time TV. There's some genuinely good stuff from the likes of Syd Dale, Gordon Langford, Johnny Scott, Frank Chacksfield and Roger Roger.

Anyone old enough to remember the latter's Greenland Sleigh Dogs will instantly recall that girl (Carol Hersee), the blackboard and that scary bloody clown! Take a totter down TV memory lane.
Posted by Crispy32 at 15:10

Wow - totally awesome, as is the whole blog: great work!