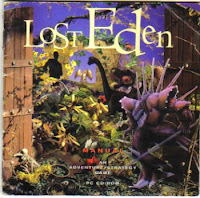 One of the more cinematic PC games of the mid-90's was Cryo Interactive's epic Lost Eden adventure game. Set in a world where humans and dinosaurs coexist, Lost Eden was probably one of the few computer games during that time which truly engaged me.

You play Prince Adam, the heir to a dynasty of human kings. Your great-grandfather was a great builder and peacemaker, but your grandfather was an evil butcher, and your father is a weakling. You are sent from the safety of your father's citadel into the dangerous world to help the humans and dinosaurs deal with a deadly common enemy of super intelligent T-Rexes, the Tyrans.


Apart from the (then) stunning graphics and intriguing story, it was the outstanding background music created by Stephane Picq that drew me in to Lost Eden's bizarre and beautiful world. For those of you who never experienced the game, the soundtrack will probably sound like 'lift muzak', but for some of us it was a world away from those horrible tinny MIDI tunes gamers had tolerated for years. Check the music out retro gamers!