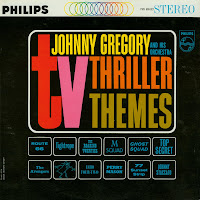 Johnny Gregory's TV Thriller Themes is one of those fabulously fortuitous finds. It's a classy collection of US and UK Crime Jazz from the mid -1960's

The man behind TV Thriller Themes, Johnny Gregory, was the son of band leader Frank Gregori, whose band was a regular fixture at Quaglino's restaurant in London during the 1930s and 1940s. Johnny Gregory became a prolific record arranger with Philips and the BBC Radio Orchestra’s principal guest conductor. An Ivor Novello Award winner Gregory wrote the music for some 27 films, and accompanied singers including Matt Munro, Anthony Newley, Connie Francis and Cleo Laine.

TV Thriller Themes is another great addition to my current fave Crime Jazz collections Jazz From Great TV Shows and Like Wild!.
Posted by Crispy32 at 20:08

thanx for this one rcool.. i really nice gregory album some fine tracks,,excellent :)

Another gem in the John Gregory cannon, I love his big sound.