The Transporter - never change the deal, no names and never open the package 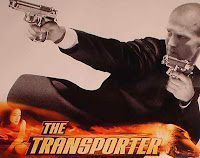 Produced by Luc Besson and directed by Louis Leterrier and Corey Yuen, The Transporter is a no-nonsense action adventure movie from 2002. Former stuntman and Olympic standard diver, Jason Statham plays Frank Martin, a gravel-voiced "transporter", who moves certain items from one place to another, according to a strict code with no questions asked.

The Transporter makes no pretensions to be anything more than it is - a slick, well made action flick with a very watchable and

charismatic leading man and some thrilling driving stunts and wild fight scenes. All in all the perfect no-brainer Saturday night entertainment. The Transporter spawned a sequel, imaginatively entitled Transporter 2 which contains even more crazy stunts. On the strength of these movies, his work with Guy Ritchie and Crank, hard man Jason Statham is fast becoming that rarest of Hollywood commodities - a British action star who can open movies.

Stanley Clarke, the slap-bass supremo formerly with Chick Corea's Return to Forever, provides a suitably solid and pacy soundtrack for The Transporter which is augmented by punchy tracks from Replicant and DJ Pone. All have their place in this fast paced action movie score. Prior to The Transporter, Clarke scored such movies as Boyz N the Hood, What's Love Got to Do with It, Passenger 57, Higher Learning and Romeo Must Die.
Posted by Crispy32 at 07:46

I love The Transporter, it's a great action flick and Jason Statham is amazing, he seems to have come out of nowhere in Lock Stock to be the one actor of that group to really make it (my money would have been on Nick Moran at the time)

Stanley Clarke's score is a solid action piece, the opening cue in the garage of the opening titles has a second or so that always puts me in mind of the Bullitt score (maybe it's just me)

You had listed this link:
http://www.mediafire.com/?8ilmiymmvme
for the music (from the animated batman site) in the comment section of Sci-Fic Scores site for The Batman the Animated series music.
That file would contain more than theme music.
If it is your compilation could you re-up it please. It would make a nice post too.
Thanks, Vince

Hi,
I just watched a Stratman Movie called "Choas" with Westly Snipes.
It's worth a look.
Vince