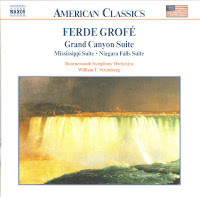 Composed in 1928-31 by Ferde Grofé, Grand Canyon Suite is an orchestral piece depicting aspects of the titular Colorado landmark. In 1958, it provided the soundtrack for Walt Disney's breathtakingly beautiful short nature feature, The Grand Canyon.

American pianist, arranger and composer Ferd Grofé began his musical career proper playing jazz piano with the Paul Whiteman orchestra and was the orchestra's chief arranger from 1920-1932. His most memorable arrangement for Whiteman was of George Gershwin's Rhapsody in Blue. In addition, Grofé also composed original film music, including the scores to Early to Bed (1928), Minstrel Man (1944), Time Out of Mind (1947), Rocketship X-M (1950) and The Return of Jesse James (1950).

It is however, The Grand Canyon Suite, an unashamed slice of evocative Americana, that Grofé  is perhaps best known. Grand Canyon Suite is divided into five highly individual movements entitled "Sunrise", "Painted Desert", "On the Trail", "Sunset" and "Cloudburst".

Sunrise opens with a representation of the moment of dawn in the canyon. The feeling of peace is present, a sense of still air, of a place owned by nature. Gradually we hear the sun mount the sky until the joyous proclamations of the full orchestra announce the arrival of another splendid and radiant day. Two main musical themes are presented: the first, announced by the piccolo, opens with a four-note motive (B-C#-G#-B) which will reappear later in the work in different guises; the second theme appears in the strings. After the trill by the piccolo, the descending notes that follow reflect the call of the canyon wren, a widespread but not frequently seen songbird common in the canyon country and desert southwest.

The Painted Desert is a watercolor of impressive delicacy and subtlety. Grofé manages to suggest the presence of some ageless, unchanging life still present in the arid and apparently lifeless desert, in the brilliant, sometimes startling colors of the rock formations, the geologic artwork of prehistory. Ingenious usage of chords and orchestral tone abound.

On the Trail is the best-known of the movements of the Grand Canyon Suite, the aural report of the day riding on the back of a pack donkey (imitating its clip-clop), beginning and ending with a great "hee-haw". A violin cadenza is used to wonderful effect. The principal theme of this movement, which is presented by the horns, and later, trombones, serves as the central motif of the suite. NB The "On the Trail" segment of Grand Canyon Suite was used for many years as the "musical signature" for radio programs sponsored by Philip Morris cigarettes, beginning with their 1933 program featuring Grofé and his orchestra.

Sunset is a nostalgic and pleasantly sentimental rendering of the most glorious of Grand Canyon moments, when the sky is alive with vibrant colors above the deepening shadows in the great gorge.

Cloudburst opens with a sleepy recollection of the theme from "On the Trail" in the upper strings. Then we enter a summation, a kind of panoramic view of the vastness of this Western scene, with brief references to other themes in the work. On to this scene suddenly come dark, scudding clouds and a rising wind. A lone cello solo suggests a mood of apprehension. The evening air is filled with fine sand and bits of tumbleweed, in the form of eerie slow violin glissandi. The storm breaks, with lightning, thunder and pelting rain. Then even more quickly, it is gone, with a last crash of lightning and peal of thunder. The moon emerges from behind the clouds and the earth rejoices in refreshed pleasure in a climactic rousing finish.

I have to confess I knew nothing of Grand Canyon Suite or its composer until a few years ago. It was only after I heard extracts on some classical compilations of American composers that I became hooked. I was struck by the epic, filmic quality of the music especially the airy Sunset, the explosive Cloudburst and the otherworldliness of the The Painted Desert - the latter would have made a great soundtrack for a 50's Sci-Fi movie! It also reminded me of the music from those wonderful old Walt Disney live action nature films that would support some Disney main feature like Blackbeard's Ghost or The Love Bug. It was therefore no big surprise to discover, that Disney had indeed used it to underscore The Grand Canyon short from 1958. The featurette is currently available as an extra on Disney's Sleeping Beauty Special Edition DVD. Don't take my word for it check out this stunning music for yourself.
Posted by Crispy32 at 14:54