During the run up to the release of Blade Runner: The Final Cut, Warner Brothers ran a promotion to encourage fans to submit material under the categories of art, fashion, literature, and music. The winner of the music category was Bentley Ousley with his mesmeric composition "Deckard's World"

Composer, Bentley is well known in Blade Runner fan circles and is widely recognised as one of the foremost experts on Vangelis' renowned music from Ridley Scott's ground-breaking cult classic. Though only three minutes and ten seconds in duration, Deckard's World captures the melancholy vibe of the movie and the lonely, rainswept, congested streets of Los Angeles in 2019 with considerable panache.

The track was born among a number of musical sketches for the soundtrack for the "Blade Runner Chronicles" a film work in progress. Commenting on the construction of the track Bentley Ousley explained,"I used the CS-80v from Arturia for the "Blade Runner Blues"-type synth sound. (Vangelis, of course, used the original Yamaha CS-80 synth for this sound). Vangelis generally used slightly mod-ed presets fro 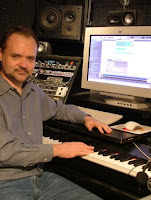 m this synth. The CS-80v comes with all the original presets from the CS-80. So ... with a little bit of experimentation, you can usually find what Vangelis was using to produce his different textures.
"I used a Yamaha CS2x for the electric piano sound. The patch is a slightly altered version of the preset "Transine". I hardly use this hardware synth anymore, but I thought the lo-fi vibe of this e-piano patch was simular to some of the early Vangelis recordings. The rain and thunder come from the SpaceHawk library. The percussion loop was made with sounds from Stylus RMX. The bass is a real bass guitar. The strings are the String Sustain instrument from Seidlecek's Complete Classical Collection."
You too can enjoy the experience of Deckard's World by downloading the track from Bentley's website HERE

Other examples from Bentley's Blade Runner sketchbook are here:
City Scape
Up All Night
Sector 4

On the strength of these tantalising glimpses into the Future Noir of LA 2019, I for one, hope these recordings received the exposure they deserve.
Posted by Crispy32 at 11:11

Thanks for these tracks from the Blade Runner Chronicles. No question but that they're special and I'm certain countless fans of the film and soundtrack would agree. I have several versions of the soundtrack and can attest to how these cuts are faithful to the tone and texture Vangelis created in making the original score so integral to the film. I hope Mr. Ousley is aware of how much so many of us appreciate this labor of love; it's work that stands on its own, and it will last.