The Razor's Edge - a cut above the rest 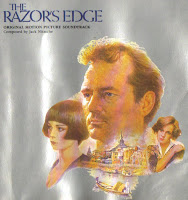 John Byrum's 1984 feature The Razor's Edge is the second movie adaptation of W. Somerset Maugham's 1944 novel of the same name. Comedian Bill Murray plays it straight as Larry Darrell, a traumatized WW1 fighter pilot who decides to search for elightenment by travelling to Tibet.

Critics and audiences expecting Murray's wise-cracking funnyman persona especially after Ghostbusters, were clearly confused by his noble attempts to demonstrate his acting talents and gave the Razor's Edge a universal thumbs down. In fact Razor's Edge is beautifully framed and staged with Murray putting in a thoroughly convincing performance.

The late Jack Nitzsche's lush orchestral soundtrack for The Razor's Edge is suitably romantic with a sweeping Barryesque theme. Elsewhere you will hear snatches of Aaron Copland and Samuel Barber as well as ethnic music to reflect the exotic locales. This is a classic soundtrack not to be missed.
Posted by Crispy32 at 12:59

tax lawyer
Do you need tax help?. Call 888-241-0002, and speak with an expert tax attorney, CPA, or enrolled agent to learn your legal tax relief options.

Small businesses can count on us for IT Support, Cloud Solutions and IT Outsourcing. We always try to provide reliable, responsive IT help and cloud solutions in Manhattan with a personalized touch that can cost effectively.